Khouri Dermatology is very experienced in treating skin cancer, a disease in which malignant cancer cells form in the tissue of the skin. We treat various forms of skin cancer and offer several treatment options based on the type of cancer. 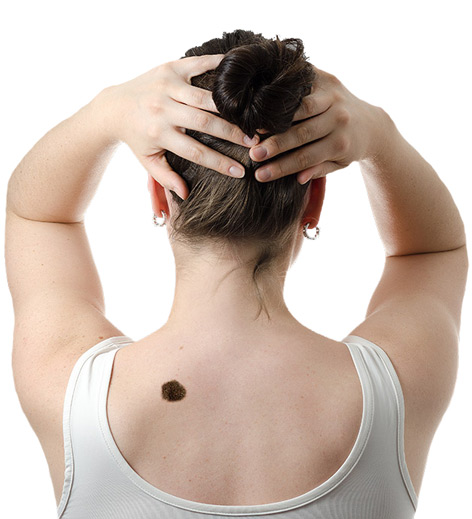 Skin cancer is the most common form of cancer in the United States. Skin Cancer occurs when the DNA in skin cells become damaged and are not able to repair themselves anymore. This damage cause the skin cells that were affected to start to grow and divide uncontrollably. When it starts to grow uncontrollably the cancer develops usually in the outermost layer of the skin. Skin cancer can affect anyone, but it is more common with people of lighter skin.

Mohs Surgery is microscopically controlled surgery used to treat common types of skin cancer. It is one of the many methods of obtaining complete margin control during removal of a skin cancer (CCPDMA – complete circumferential peripheral and deep margin assessment.) Using frozen section histology. Mohs surgery allows for the removal of a skin cancer with very narrow surgical margin and a high cure rate.
Read More about MOHS

Excisional biopsies are usually larger and deeper in terms of skin extraction and are used to completely remove an abnormal area of skin such as a skin cancer. An excisional biopsy is the preferred method for removing lesions suspected to be melanoma. The entire tumor along with a margin of tissue that is not a visible part of the tumor is removed. Most of the time the wound does not need serious treatment however based on the circumstances it’s not unusual to have stitches, a skin graft, or a skin flap to treat the wound.

Curettage is the process of scraping the skin with a spoon-shaped instrument (called a curette) to remove skin tissue. Layers of skin are scrapped until the layer containing the cancer is removed. An injection or spray is first used to anesthetize (numb) the area before the growth is removed (curetted). No stiches are necessary and the minimal bleeding can be controlled by applying pressure or the application of a blood-clotting chemical. This procedure is best suited for cancer located in the outer most layer of the skin.

Most commonly used for the treatment of basal cell cancers and squamous cell cancers in the skin. A curette is first used to scrape off the cancerous cells, after some scraping has been done the second step is to use an electrosurgical device to perform electrodessication which kills the tissue with a rapid increase in temperature. The process is repeated until the desired results are acquired. This method is quick and easy to perform under a local anesthetic.

In its most general sense, it is the treatment of a disease by chemicals that targets cancerous cells. Chemotherapy kills cancer cells that divide quickly and reproduce in the body, one of the main traits of cancer. Medication can be taken by mouth, injected and applied to the skin in the form cream or lotion. These drugs often are called “anti-cancer” drugs. Chemotherapy is usually applied to the skin one or two times a day for several weeks. A drug called fluorouracil (5-FU) is used to treat basal cell and squamous cell cancers that are only in the top layer of the skin.
Aldara is a cream that treats the most common form of cancer, basal cell carcinoma (BCC).

Aldara is a cream that uses your body’s immune system to attack the skin cancer. It stimulates the body’s natural defense to kill the skin cancer cells. Cytokines is the main ingredient that is used to kill the malignant cells. With Aldara there is no need for any operation and can be put at home. Aldara is used to shrink the Cancer if it is too big and be able to do other procedures to it.

The most common cancer in humans, BCC develops in more than 1 million people every year in the United States alone. It rarely metastasizes or kills, but it is still considered malignant because it can cause significant destruction and disfigurement by invading surrounding tissues. Light-colored skin and sun exposure are both important factors in the development of basal cell carcinomas. About 20% of these skin cancers, however, occur in areas that are not sun-exposed, such as the chest, back, arms, legs, and scalp. The face, however, remains the most common location for basal cell lesions. Weakening of the immune system, whether by disease or medication, can also promote the risk of developing basal cell carcinoma.

[p]About 16% of diagnosed skin cancers are SCC. This cancer begins in the squamous cells, which are found in the upper layer of the epidermis. About 200,000 cases are diagnosed ever year. Squamous cell carcinoma (SCC) is the second most common type of skin cancer. Together with basal cell carcinoma, the most common skin cancer, these two cancers are collectively referred to as non-melanoma skin cancer. A squamous cell carcinoma (or SCC) is a skin cancer that may appear as a bump or as a red, scaly patch. It often is found on badly sun-damaged, fair skin, and because of this often develops on the rim of the ear, the face, and the lips. It is not as dangerous as melanoma, but still leads to an estimated 2,300 deaths every year.

Melanoma is the most serious form of skin cancer. Accounting for about 4% of all diagnosed skin cancers, it is almost 100% curable. Melanoma is a malignant tumor of melanocytes.Melanocytes are the cells that make melanin, which gives skin its color. Melanin also protects the deeper layers of the skin from the sun’s harmful ultraviolet (UV) rays. The majority of melanomas are black or brown. However, some melanomas are skin-colored, pink, red, purple, blue or white.

I have noted a spot on my skin of my left arm that is brown in color that is growing. I am worried because friends say it could be skin cancer.

You must go immediately to see a dermatologist. There are many skin spots that could be caused by sun exposure and may be benign. But the spots that grow could be melanomas and this type of cancer, must be caught at an early stage, otherwise, it could be life-threatening.

I have a history of melanoma in my family that I keep hearing about. Could you please explain what it actually is, how I can watch for it on my skin and is it curable? Is there any way to avoid it?

Melanoma has a genetic basis, so it’s imperative that you and your siblings get checked on a regular basis by a board-certified dermatologist. Melanomas have different appearances. But they look like moles that have asymmetry, or irregular borders. They can also look like moles with different colors in them, or larger than 6mm, which is the back of a pencil eraser. The most important thing is to be aware of how your moles look and if any of them change, you need to see your dermatologist. If you have many moles, you can have pictures or a map of your moles done by your dermatologist.